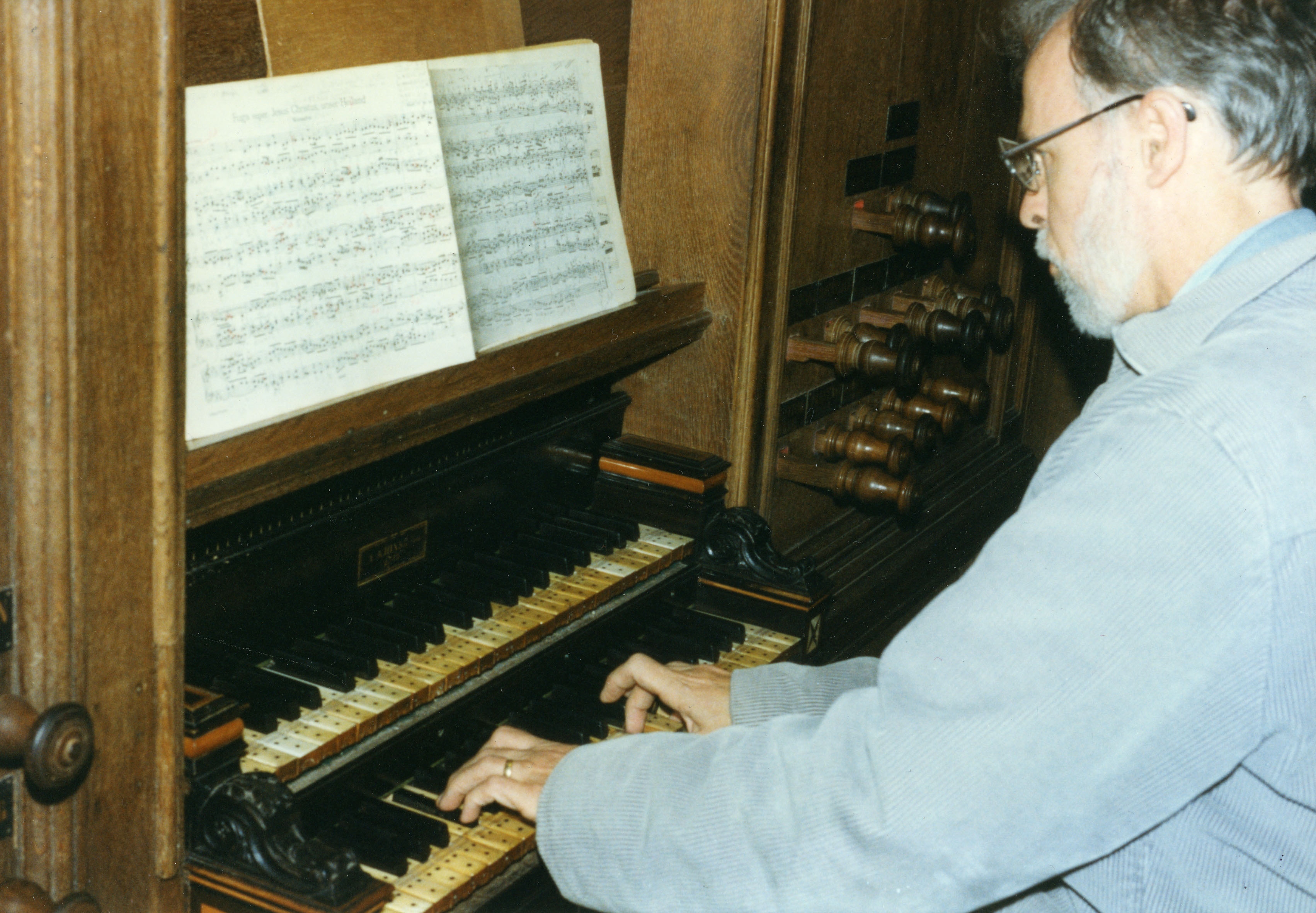 In public masterclasses as a player (participant)

I first heard Leonhardt play, live, on the Flentrop organ in the Busch-Reisinger Museum at Harvard, on 18 August, 1960. I had heard of the instrument through recordings of E. Power Biggs, and asked colleagues at the Andover Organ Co. in Methuen, where I was working during a year away from college, whether I should go. Walter Hawkes said yes, with enthusiasm, so I did. Around the same time I heard Leonhardt's recording of Frescobaldi - on a Neupert harpsichord, I think, and on the wonderful organ from 1511 in the Silberne Kapelle in Innsbrück - and his first recording of the Goldberg variations on an Ammer harpsichord, if I recall correctly. I found the Goldbergs particularly compelling, but both recordings were at a level far above what could be heard from other players. I heard him later as a student at the University of California in Berkeley, where I had courses with Alan Curtis, who was a former pupil of his, and where I continued to follow his recordings. His recording of Louis Couperin and d'Anglebert in particular I found enthralling. I also played for him in a master class there, on the Holtkamp organ (RIP) in Hertz Hall. Curtis encouraged me to study with him, and after the finances were arranged I went to Amsterdam in the fall of 1967 as a private organ pupil.

I first became an organ addict in my senior year of high school. Then I majored in music at Dartmouth, with a year off spent working for Andover Organ Co. in Methuen - mostly sweeping floors in the shop and helping out on tuning and maintenance trips. In this year I got acquainted with mechanical-action organs, so I had an idea of what a player might learn from them. Also in this year, Fisk's op.35 for Mount Calvary church in Baltimore was built and installed. At Berkeley I completed an M.A. in music history, studying organ on the side with a wonderfully gifted piano teacher who had some background in organ playing.

Did you present each piece of music only once, or more often? Was this your own choice?

Leonhardt was not interested in hearing a piece more than once. This was rather a shock at first, since my previous teacher had willingly worked on a piece for several lessons.

Please describe a typical lesson or various types of lessons you received. For example: the frequency, length and location of the lessons, the specific instruments used, the number of pieces you typically presented, how much discussion there was, how much Leonhardt played and at what point during the lesson, etc.

The lessons were a bit irregular, since Leonhardt was often away; but when I had something I felt ready to present, we could always find a suitable time. Lessons were on the Müller organ of the Waalse Kerk in Amsterdam, where he was the organist. The instrument had recently been restored by Jürgen Ahrend, and was itself a wonderful teacher. Since I was his only organ student at the time, I could practice there for many hours a day. Besides lessons, I managed to visit a number of old and new Dutch organs: Brouwershaven, Oude Kerk Amsterdam, Amersfoort, Nieuw Scheemda, Noordbroek, Krewerd, Der Aa-Kerk in Groningen, Oosthuizen, Medemblik, Westervoort, IJzendijke,

After leaving Amsterdam I returned to Dartmouth as College Organist. This is what forced me, finally, to take up the harpsichord: I could no longer convince or even deceive myself that I could make music the way I wanted to on organs with electric action. Fortunately the college had a Dowd French double from 1964, and I soon bought a Hubbard "Italian", and later, a two-manual harpsichord based on the 1688 Richard harpsichord at Yale, made by Hendrik Broekman and decorated by Sheridan Germann. Since I was practicing more on the harpsichord than on the organ, I played more and more harpsichord music (though the distinction is far less rigid than many still seem to believe, even now). I found Leonhardt's recordings invaluably instructive, also as to distinctions between what one can or might or should do differently with the same piece on the two instruments. I had the pleasure of hearing Leonhardt play many times and in many places up until his last years and every time I found the musical experience of the greatest value, though of course it was made even more valuable to me by the knowledge that I had gained from his teaching and recordings. We corresponded occasionally as well, several times about what I found to be questionable passages, or notes, in original sources or scholarly editions. He was always interested and encouraged my sleuthing ("Dear investigator", begins one of his replies) but was always reluctant to adopt my suggestions; in that, his obedience to the authority of early sources was almost too inflexible, I thought.

What are the most important things Gustav Leonhardt taught you, or the ways he most influenced you as a musician?

Diplomas: Bachelor of Arts, Dartmouth College, Hanover NH, 1963 [music major]; Master of Arts in Music, University of California at Berkeley, 1966 [music history]. Career: US, 1969-75: College organist and Music Librarian at Dartmouth College. NL and Sweden, 1976-2001: Music Librarian, head of the Muziekafdeling, Openbare Bibliotheek Groningen. Detached to the Göteborg Organ Art Center [University of Göteborg, Sweden] in 2000-01 for the English language editing of the scholarly documentation of the North German Organ Research Project, published in 2003. Concerts: regular concerts in the US, the Netherlands, Germany, France and Sweden on harpsichord and on historical organs. Publications: articles for Organ Institute Quarterly, Art of the Organ, The Diapason, The Organ Yearbook; translations for numerous CD booklets; program notes for Dartmouth College concert series, 1972-75; concert reviews for Nieuwsblad van het Noorden, Groningen, 1977-79; book reviews for Art of the Organ, The Diapason. Music teaching: organ and harpsichord lessons for private pupils