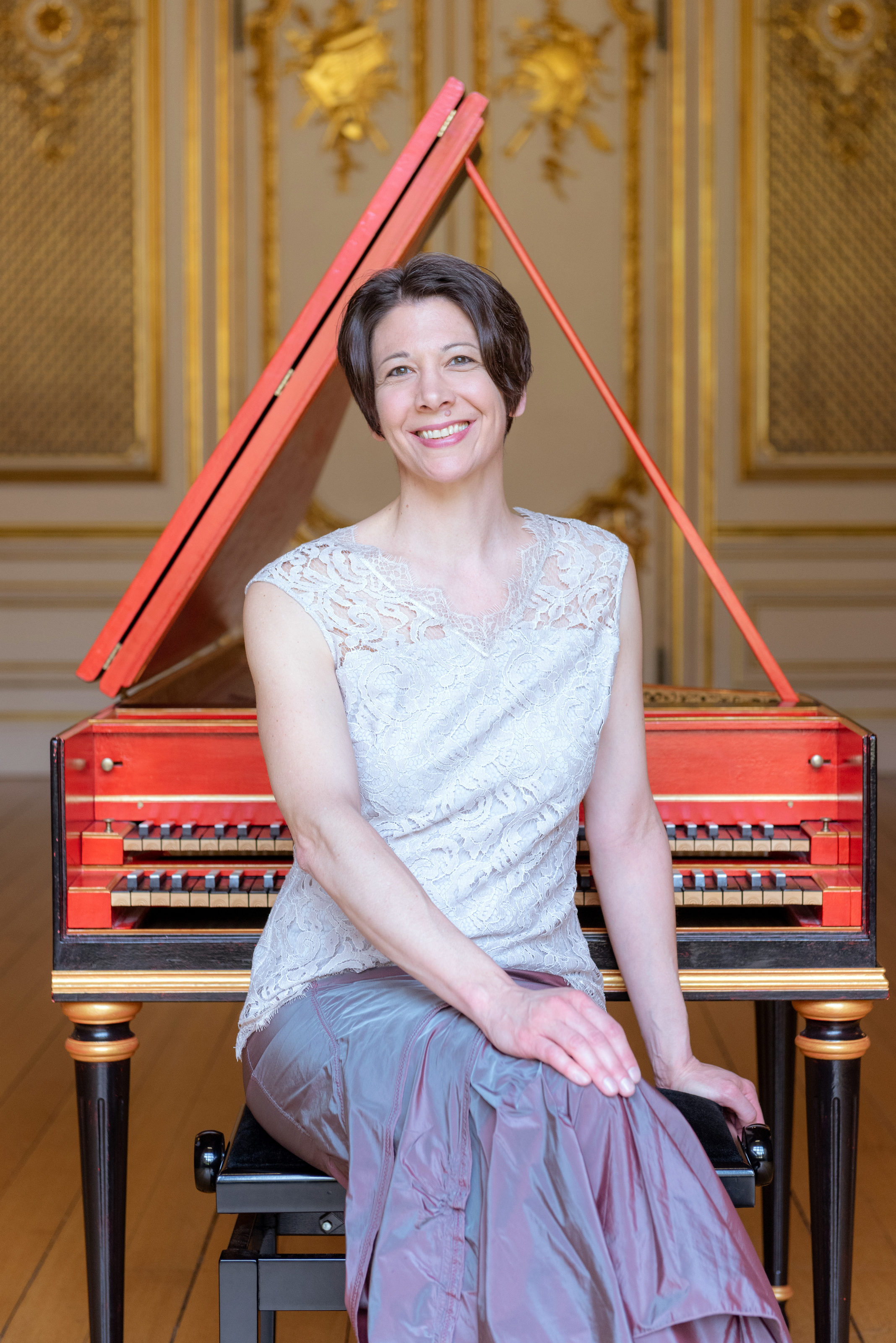 In private masterclasses as a player (participant)

I was in my late teens when I got invited to attend private masterclasses with Gustav Leonhardt in Cologne. The classes were hosted by Edith Freifrau von Pechmann. The harpsichordist Annemarie Bohne was involved in organising them. I had been recommended to Gustav Leonhardt by Gisela Gumz (please see her contribution to the GLPA). At that time, I knew some of Leonhardt’s recordings, and I had listened to a recital of his in Brugge, but I wouldn’t have dreamed of asking him for lessons! It was a privilege, even more so as participants did not have to pay a fee for the masterclasses.

I had studied the harpsichord for about 10 years before I attended the masterclasses with Gustav Leonhardt. My teacher for many years was Bettina Weidenmüller, a former student of Fritz Neumeyer. From about the age of sixteen I had had lessons with Egino Klepper, who taught at the Musikhochschule Heidelberg-Mannheim where I became a junior student in 1991. In addition to that, I had participated in a masterclass with Robert Hill in Mainz which I had won a scholarship for. I had had occasional lessons with Gisela Gumz, and I had attended summer courses for baroque chamber music with baroque cellist Gerhart Darmstadt, amongst others. When I attended the Cologne masterclasses with Gustav Leonhardt for the second time, I had graduated from school and just taken up my studies with Robert Hill at the Hochschule für Musik Freiburg.

The repertoire of the masterclasses was announced in advance. This must have been Gustav Leonhardt’s choice. - JS Bach, Inventions and Sinfonias (1992) - Frescobaldi (1993) To me, the masterclass about Frescobaldi laid the foundation of my understanding of that style.

He hardly mentioned any aspects of keyboard technique apart from the occasional remark on fingering. His fingerings were not always strictly historical, but consistently connected to his decisions regarding articulation and dynamics. He used to conclude the masterclasses with a question and answer session, and I remember one of the participants asking why he had said so little about the technical aspects of harpsichord playing. All he replied was: “Maybe there wasn’t so much to be said!” This certainly was a polite understatement. I did wonder at the time whether he thought that by focusing on the music and questions of interpretation the technical side would fall into place automatically. Today I tend to think that he simply preferred not to teach technique.

I met him again a couple of times, but the encounters were only brief, and I did not approach him with further lesson requests. His feedback on my performance at the international harpsichord competition of the NDR in Hamburg in 1997 felt like a condensed masterclass to me. He had made detailed notes that he shared with me. He gave brief summaries of what he thought was the essence of each piece I had performed, bringing my attention to details such as the “beauty of a sixth that is treated as a dissonance”, a reason for him to play it arpeggiated, with a moment of lingering on the note.

What are the most important things Gustav Leonhardt taught you, or the ways he most influenced you as a musician?

As I studied with two of Gustav Leonhardt’s former students in the years succeeding the Cologne masterclasses, some of his ideas have reached me ‘second hand’, enriched or altered by his former students’ own ideas, and it is with some difficulty that I attempt to disentangle these. I think that two of my basic beliefs around harpsichord playing have their roots in the encounters with Gustav Leonhardt: 1. Dynamic thinking is indispensable when playing the harpsichord. 2. It is crucial to react to the sound of the instrument you play. An awareness of the ‘blooming’ and the decay of the notes will enable you to develop a subtle sense of timing.

The masterclasses took place at Edith Freifrau von Pechmann’s private home, a beautiful villa in Marienburg (Cologne). She was a lady of advanced years, I believe she must have been in her 90s. During the masterclasses, she would sit in her armchair somewhat aside from ‘the master and his scholars’, the musical scores in front of her. There was an atmosphere of exclusiveness to the masterclasses, which was reinforced by the fact that they were not open to the public, and by Gustav Leonhardt’s aristocratic manners. If I remember rightly, Freifrau von Pechmann owned a double manual harpsichord by Klaus Ahrend which was used for the 1992 masterclasses. For the Frescobaldi themed masterclasses in the following year, an Italian harpsichord was provided (unfortunately I cannot recall any details). The masterclasses were conducted in English, but I witnessed Gustav Leonhardt switching effortlessly from one European language to another. When a participant presented a work, he would sit in the background, listening with concentration. He would then comment briefly on the performance, before sitting down at the harpsichord to demonstrate his own approach to the piece. He was kind and encouraging with his comments towards the participants – I still treasure his words – but the most fascinating part of the masterclasses to me was being able to watch him play and explain. It was a mixture of talking about, playing and sometimes singing the music. I was fascinated by a particular gesture that he made repeatedly: he covered his mouth with his hand to indicate a decrescendo when singing/speaking a musical phrase. I think, dynamic thinking was one of the secrets of his playing. He did not give extensive explanations of music history. Such topics were touched upon, but he expected that we had acquired the knowledge elsewhere. At some point during the Frescobaldi masterclasses, he played an anonymous piece to us, wanting to know our opinion on its attribution (he thought it might be an early work by Froberger). He generally advised us to find pleasure in playing. “If you as a performer enjoy playing a piece, the audience will have more pleasure, too!”

Medea Bindewald studied harpsichord with Robert Hill in Freiburg and with Ketil Haugsand in Cologne, where she graduated ‘with distinction’ in 2001, followed by a post-graduate soloist exam in 2003. In the same year, she won second prize at the Deutscher Hochschulwettbewerb in Saarbrücken. Medea was awarded scholarships from the International Handel Academy Karlsruhe and the European Academy for Music and Performing Arts in Montepulciano. She further pursued complementary studies in basso continuo playing at the Schola Cantorum Basiliensis, with Jesper Christensen. Her concert career has taken her to numerous European music festivals and concert series, including Kultursommer Rheinland-Pfalz, Festival de Música Antiga Barcelona, Tage Alter Musik Bamberg, Schlosskonzerte Bad Krozingen, Bruchsaler Schlosskonzerte, Heidelberger Frühling, Stour Music, Horniman Museum London and Handel & Hendrix in London where she featured as ‘musician of the month’ in October 2014. Medea has made live radio appearances, including on German radio's live programme TonArt (WDR3, major German radio station). In 2016, she was Guest Editor of the British Harpsichord Society’s online magazine Sounding Board. From 2003 to 2010, she taught at the Early Music Department of the University of Music and Theatre ‘Felix Mendelssohn Bartholdy’ in Leipzig. In her artistic work, she enjoys exploring areas beyond the mainstream. She has a special interest in the harpsichord repertoire with accompaniment for the violin which she has been delighted to explore in partnership with the baroque violinist Nicolette Moonen, artistic director of The Bach Players. This is also reflected in her two CDs, released by Coviello Classics: Jacques Duphly, Pièces de Clavecin (2014) and Jacob Kirkman, Lessons & Sonatas (2017). Both recordings have been awarded 5 de Diapason by the French magazine Diapason. The Kirkman CD got a five-star rating by WDR3 in two categories (interpretation and repertoire). An innovative crossover project – ‘Music and Light Symbiosis’ – in collaboration with the British artist Kate Beaugié was staged at the Mathematical Institute of the University of Oxford in 2019.