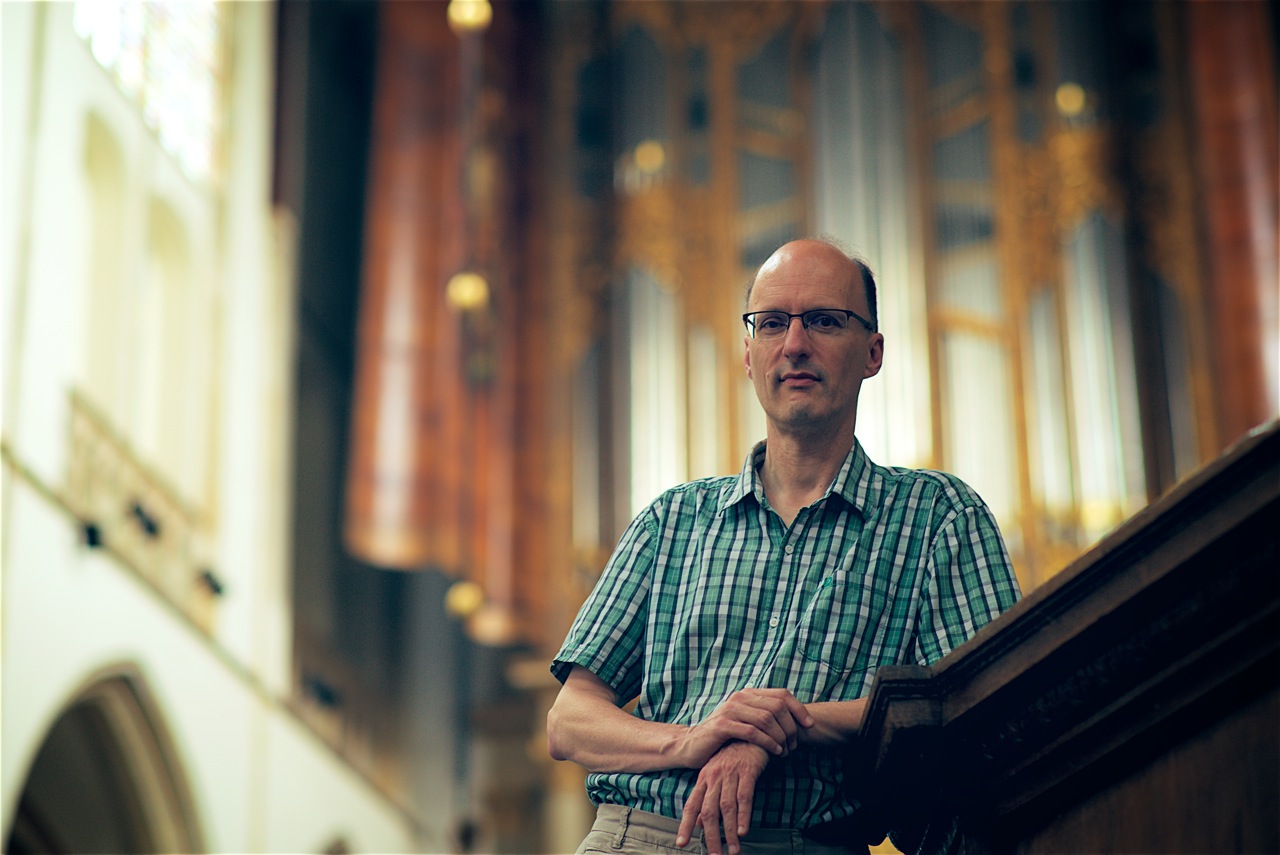 As a student at the Conservatory in Arnhem I bought the double LP on which Leonhardt was performing a collection of large Bach Preludes and Fugues on his organ at the Église Wallonne (Waalse Kerk) in Amsterdam. To listen to those recordings was really a revelation. In Arnhem the organ tuition was given exclusively on historic organs. My lessons took place at the Bader organ in Zutphen and at the König organ in Nijmegen, so my interest in early music and the sound of well-preserved instruments from the 17th and 18th centuries was founded. In 1979 I decided to participate in the Hofhaimer competition in Innsbruck. In this competition the jury always consisted of the same musicians, among them Leonhardt, Zehnder, Radulescu, Tachezi and Tagliavini. For me as a young student it was the first time to prepare music by Hofhaimer, Gabrieli, Frescobaldi and to make intabulations myself in 16th-century style. The preparation of that repertory was a very inspiring experience. I had the good fortune to reach the final and to be able to play on the organs of the Silberne Kapelle and the Ebert organ in the Hofkirche. In those years the Hofhaimer competition was the only organ competition focusing exclusively on early music. Perhaps most important for me were the conversations with the jury members at the end of the competition. I learned a lot from their views on this music and their opinions on how to treat these very special instruments. That was the moment I decided to ask Leonhardt if I could have a number of lessons with him. In 1980 I sent him a letter about my wishes and he answered also by letter that it was possible and that we could fix a date.

I had been a student of Bert Matter at the Conservatory in Arnhem since 1974. In 1980-81 I was preparing my final exam Uitvoerend Musicus, now known as Masters Degree. In that last year I had my lessons with Leonhardt.

Did you present each piece of music only once, or more often? Was this your own choice?

Yes, I presented each piece only once. It was his choice, he made it clear to me that he had given me his opinions and that that was sufficient.

Please describe a typical lesson or various types of lessons you received. For example: the frequency, length and location of the lessons, the specific instruments used, the number of pieces you typically presented, how much discussion there was, how much Leonhardt played and at what point during the lesson, etc.

The lessons took place on the wonderful Christian Müller organ (1738) at the Église Wallonne (Waalse Kerk) in Amsterdam. This organ was one of the first in the Netherlands to be restored by Jürgen Ahrend, under the supervision of Leonhardt. The instrument is very well preserved and has beautifully voiced principal stops, all doubled in the treble and a splendid plenum. Since 1989 I have taught many students on this instrument which is a teacher in its own right! The length of the lessons with Leonhardt was around 1.5 to 2 hours. A very important topic which Leonhardt emphasized was the treatment of dissonances and suspensions. He really wanted them to be played legato to create the effect of a diminuendo. I remember the moment that Gustav wanted to demonstrate the rhetoric in the pedal solo of the Toccata in C BWV 564. He felt obviously very insecure in playing pedal. To be able to look where he should place his feet, his knees were spread.

Once I attended an organ concert given by Leonhardt in Sassenheim. After the concert I asked him if he had played Sweelinck with early fingerings. With a meaningful smile he made it clear that he did not use those fingerings at all. The most inspiring idea in Leonhardt's lessons was the clear focus that a performer should think very dynamically, especially on instruments like the organ which can sound very straightforward and square. If an organist is able to imitate string players, flutists, oboists and singers in a convincing way he/she will bring the essence of the music to the audience.

Did he discuss historical​ ​ performance practice or different types of historic instruments, refer to musicological research, performance treatises, ornament tables, etc.? If so, in what particular situations and musical contexts?

During my organ lessons he referred to other instruments and singers. I remember his lecture at the Sweelinck symposium in Utrecht 1999 in which his theme was “Varietas”. In that lecture he convincingly made a link between Amsterdam's architecture and the music of Sweelinck.

Did he ask you to defend your interpretive choices? More generally, did he approach questions of personal autonomy and individuality as a performer during your studies? In what way?

I only had a number of private lessons. These questions did not play a role in his tuition to me.

What did you hope or expect to achieve from your lessons with Gustav Leonhardt?

I have been an admirer of Leonhardt's musicianship since my youth. For me he was simply magic in performing certain repertory, especially on the harpsichord. In the way he performed Frescobaldi and Froberger on the one hand and the French compositions from the Grand Siècle on the other he convincingly demonstrated his affinity for these different cultures. His treatment of tempo, timing, rhetoric, freedom was absolutely unique. These are the aspects I wanted to learn from him.

In 2000 & 2001 I was in close contact with Leonhardt, Bernard Winsemius and Leo van Doeselaar because we organized a festival called 'Muziek uit de gouden eeuw' (Music from the Golden Age) in the three big churches: Nieuwe Kerk Amsterdam, Pieterskerk Leiden and St Laurenskerk Alkmaar. Our aim was to create a festival with world leading ensembles in symbiosis with organ repertory from the same region and time. The program and content of the festival were very successful; unfortunately the concerts were poorly attended, therefore the festival took place only once. Beautiful memories of our meetings and discussions in the kitchen of Leonhardt's house on the Herengracht. We discussed the concert themes and the musicians and ensembles which would best match them.

Did his approach to teaching influence the approach you have taken with your own students? If so, how?

Absolutely! We can be very lucky that Leonhardt has recorded such a broad repertory. Therefore we can still enjoy his sound, his timing, his suggestion of dynamics, his tempi, his rubato ... A bit sad is that if I refer to Leonhardt with my students, many of them look ignorant ... they do not even know his name! So quickly time passes.

Pieter van Dijk (1958) is City Organist, and organist of the Grote Sint Laurenskerk, in Alkmaar, the Netherlands, where he acts as custodian to two of the world’s most significant historic organs. As one of Europe’s most sought-after teachers, Van Dijk is Professor and Head of Organ Studies at the Conservatory of Amsterdam, a position he combines with a Professorship at the Hochschule für Musik und Theater in Hamburg. Together with Frank van Wijk, he is Artistic Director of Organ Festival Holland, which places the renowned Alkmaar instruments at the centre of a prestigious international organ competition, organ academy and concert series. Pieter van Dijk was a pupil of Bert Matter at the Arnhem Conservatory, before going on to further his studies with Gustav Leonhardt, Marie-Claire Alain and Jan Raas. As a performer he was awarded prizes at international competitions in Deventer (1979) and Innsbruck (1986). His many recordings on historic organs throughout the Netherlands and beyond have included the Fugue State Films DVD ‘The Organs of the Laurenskerk’, which in 2013 was awarded the Preis der Deutsche Schallplattenkritik. In 2017 he commenced the recording of a complete Bach-cycle for DMP Records. Van Dijk’s research interests have led to the publication of articles about Weckmann, Sweelinck, Bach and the playing style of the great early 20th-century German organist Karl Straube. He was one of the advisors behind the much-lauded reconstruction of the organ at the St Katharinenkirche in Hamburg, on which Bach famously performed in 1720. As a performer and jury member at international competitions, Pieter van Dijk has appeared throughout Europe as well as in the USA and Japan.